Hackday A-Wearable was the successor to Hackday Data of the Crowds of 2014 and shares the basic theme of the dialog between personal and city data.

This year we focussed more on the interaction layer that wearables are. Wearables become tools to be aware of our context fueled by the data, hence the theme ‘A-Wearable’. The hackday was organised by Creating010 in collaboration with info.nl and Willem de Kooning Academy. 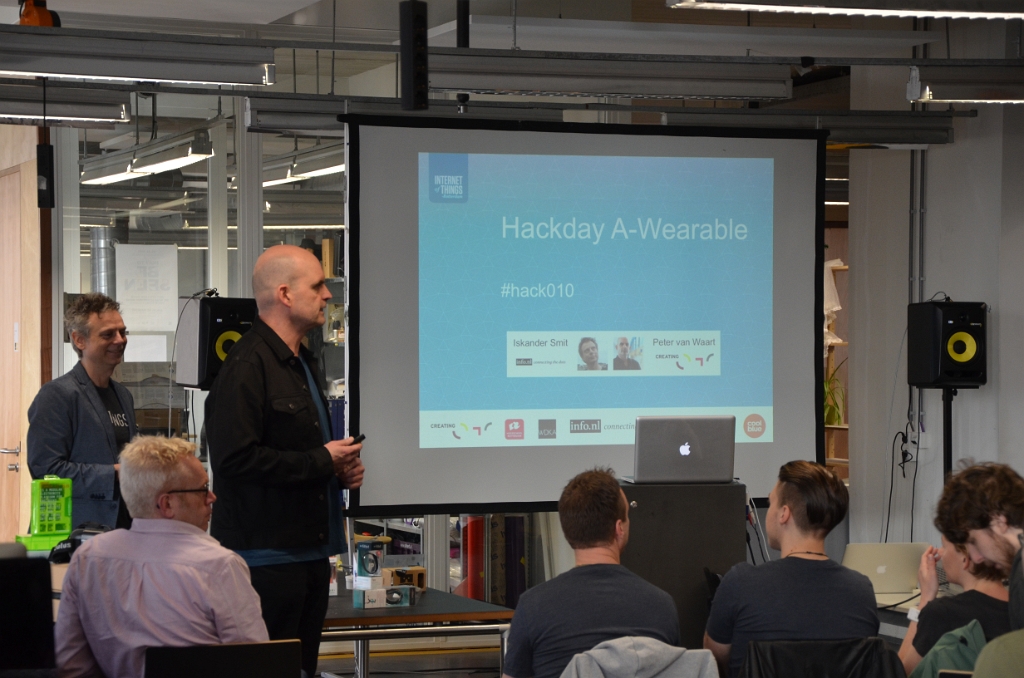 In short, the challenge for this Hackathon consisted of the development of a ‘A-Wearable’, that explore how data, IoT and wearables can be of meaning to people in a ‘smart’ city. How will data produced by the user himself interact with the data of the city? The A-Wearable will make the aware the citizen of his context or will extract data from the citizen to use in a relevant service. Collaborative generated and shared data can grow into the ‘Data of the Crowds’.

This day, 42 participants took up the challenge. Among them were students and lecturers from universities, design professionals and developers from design and internet agencies Mangrove, info.nl, IN10 and Zicht, a few independent designers and image makers, two men from the Port of Rotterdam and … one citizen. Participants worked in 9 teams and thought about these questions through making a prototype, with which they explore how data, IoT and wearables can be of meaning to people in a desirable future smart city.

The hackday took place in the Interaction Station of the Willem de Kooning Academy, stuffed with electronics and machines for makers, and the ideal environment for a hackathon like this.

More information on the theme, the challenge and the available datasets were provided to the teams through http://awearable.nl/.

The Jury and Criteria

At the end of the day, the teams were asked to pitch their concept and prototype to a jury of experts. Members of the jury were: 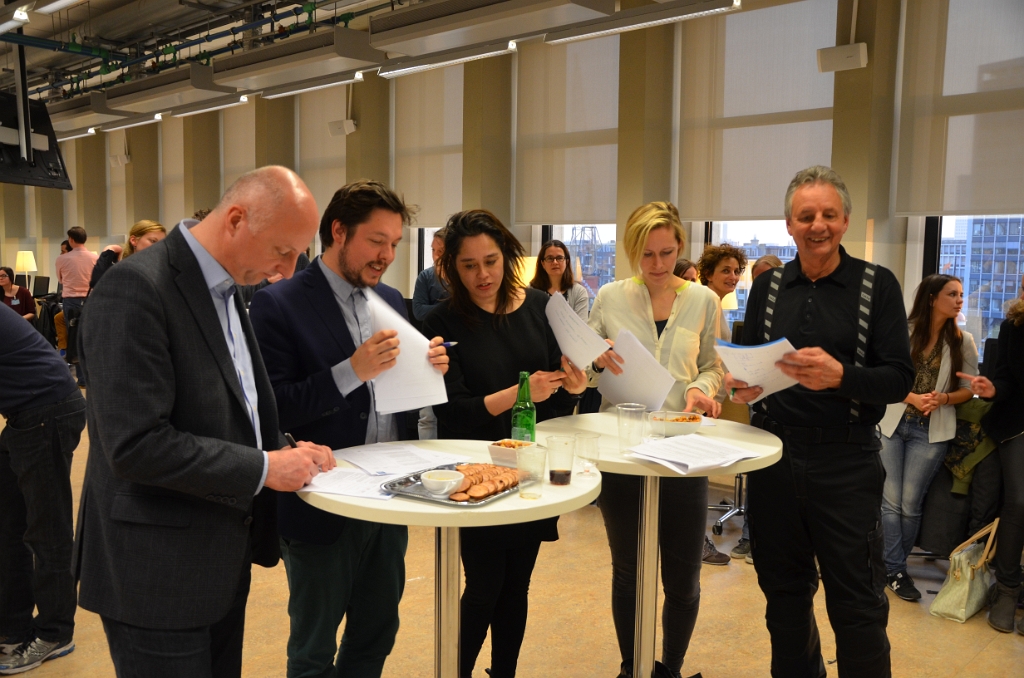 The jury, busy scoring the pitches

The judges rated the concepts and applications through several criteria which were distilled from the A-wearables/Personal API themes. They payed particular attention at the following criteria:

The concepts, prototypes and winners

After a brief introduction the teams started at 9.45 AM with concepting. Several wearables such as smart phone, Jawbone, Fitbit, Google Glass, Oculus Rift were provided to inspire the participants. Throughout the day, refreshments, lunch and dinner was served. At 5 PM, the teams were asked to deliver their concept presentation to the organisation and to wrap up their activities. 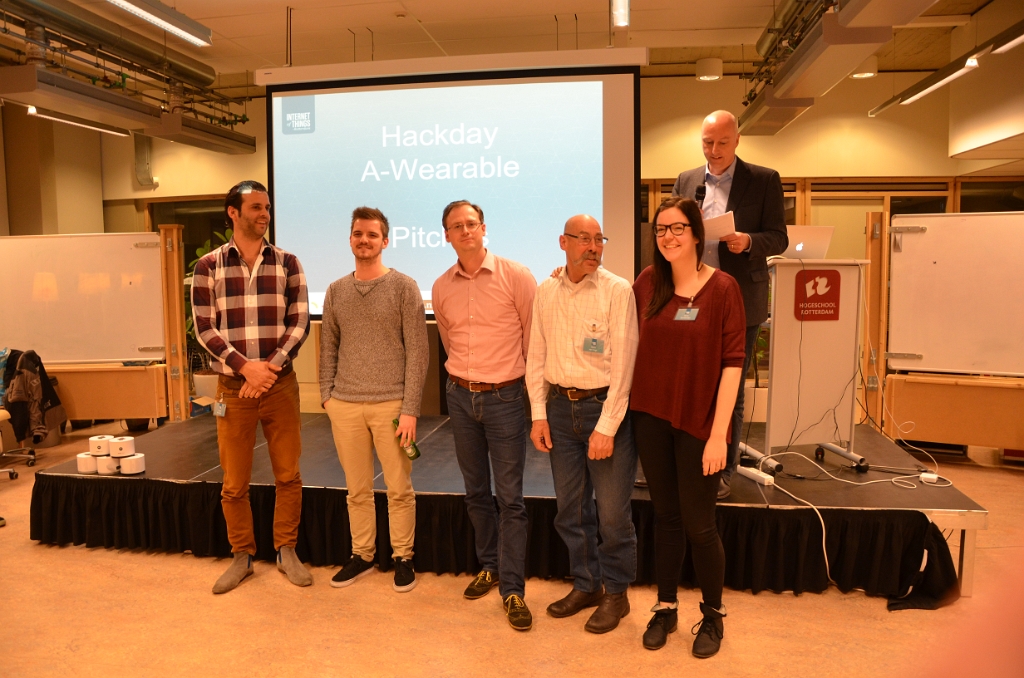 At 7 PM, Creating010’s programme director Paul Rutten opened the evening and the teams took of to present their concept in 3-minute pitches.

The first prize, a Motorola Smartwatch for each team member, was won by team GreenMe. The team (Frank Molendijk, Jouke Dijkstra, Adrian Klingen, Anne Sunderman en Guus van Vugt) developed a concept and working prototype based on open data of street furniture and location information of the user, what makes it possible to guide a pedestrian to the nearest garbage bin to get lost of his litter. The aim is to get a cleaner city by rewarding people for putting their litter in the garbage cans that would identify the user and benefit him with a low pollution tax rate.

The second prize, Jawbone and Coolblue gift coupon for each team member, was won by team Buddy Sense (Melanie Kool, Erik Flohr and Joran Backx). The created a prototype of a wrist wearable functioning as a compass that directs you to your friends during events such as pop festivals. The team impressed the audience by a self-made, working prototype of sensors, Arduino and laser-cutted container.

The third prize, a Coolblue gift coupon for each team member, was won by Sync Skin (Mick Tjerks, Jeroen Bouweriks, Justin Boot, Bran van Waarenburg an Matthijs van Haagen). With design fiction they envisioned a future wherein physical ‘smart’ plaster will creep up to your body in search of anomalies to heal. Next to some convincing pictures on the slides of their presentation, one of the team member also dressed up with their prototype (a mix of sensors, leds, plastics and fluids) demonstrating they working of their concept.

Prizes (Smartwatches, Jawbones and gift coupons) were provided by info.nl, CMI (Hogeschool Rotterdam) and Coolblue. Jury chair Frank Vieveen handed over all prizes to the winners and after that, the audience closed International IoT Day Rotterdam 2015 with drinks and chatting.

‘A-Wearable’ proved to be a theme that stimulates the imagination of future (or even current) possibilities of applications of IoT and (open) data in urban area’s. Hopefully, participants will take their experience and insights from this day into their daily work to make technology applications even more meaningful in people’s lives.

See other video registrations of the ‘IoTday 2015’